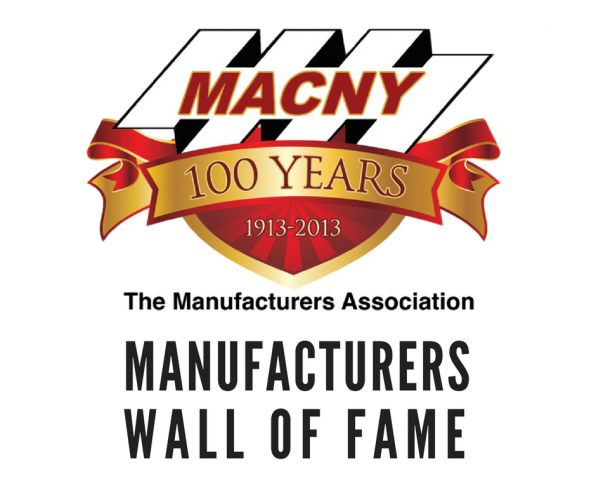 “The Wall of Fame Committee this year is pleased to announce Raymond and Arnie as our 2017 Inductees into the Manufacturers Wall of Fame,” stated Randy Wolken, MACNY President & CEO.  “Both Raymond and Arnie are considered to be pioneers of manufacturing excellence and success here in Central New York, and we are pleased to not only honor Arnie and his achievements, but to celebrate the life and accomplishments of Raymond with his family and company. On behalf of the Wall of Fame Selection Committee and the manufacturing community as a whole, I would like to congratulate Raymond, Arnie, and their families and employees on this well-deserved induction into the Manufacturers Wall of Fame. We look forward to honoring their lifetime dedication to manufacturing and achievements at MACNY’s 104th Annual Dinner in Syracuse.”

In 1982, the late Raymond Currier founded Currier Plastics, with the purchase of two injection molding machines and a vision of setting a new standard for service and quality in the molding industry. Raymond served as the Founder and President of Currier Plastics, until 1987 when his son John took over.  Ray remained engaged with the company as engineering draftsman.  Under Ray’s leadership and throughout his tenure with the company, Currier Plastics grew to become the internationally renowned custom plastics injection and blow molding company that it is today. “My fondest memory of my dad at work was passing by his office on Saturday mornings and hearing him contently whistling as he worked at his drafting board.  I’m pretty sure he’s whistling now, content that he gave us a good start and pleased with what we have accomplished,” said John Currier.

Rubenstein is the Chairman of the Board of United Radio, a High Tech Electronics Remanufacture and Distribution company based in East Syracuse. Under Arnie’s 29 years of leadership, United Radio grew exponentially in employees, production, and diversification of products, enabling it to move from a regional business to a national market and setting the stage for it to become the global business it is today.

Currier and Rubenstein will represent the seventeenth class of members inducted into the Manufacturers Wall of Fame, joining a prestigious group of manufacturing leaders who have been honored since the Wall of Fame’s inception in 2001. The Manufacturers Wall of Fame celebrates individuals who have demonstrated long-term dedication to manufacturing in Central and Upstate New York.  Previous inductees will also attend and be recognized for their lifetime achievements at MACNY’s Annual Dinner.

The Annual Dinner and Wall of Fame Induction Ceremony will be held at the Syracuse OnCenter on May 18th, 2017.  For tickets or additional information, please contact Debbie Sindone at 315-474-4201 ext. 24 or [email protected].

MACNY Stands With Members On Key Legislation In Congress

MACNY Stands With Members On Key Legislation In Congress Randy Wolken, President & CEO As US Congress reconvenes this fall, MACNY and the Manufacturers Alliance will work with our allies...

Episode 223 of The Next Page is available for download! Download Here: iTunes | Google Play | PodBean In this week's episode, we're discussing how to make the most out of the good misses in...

Don't Miss the Miss David Freund, Chief Leadership Officer I have been watching some baseball lately and have been reminded that the best of the best only gets a hit...