Last week I wrote about President Lincoln’s cabinet of rivals.  In addition to his abilities to utilize differences and build coalitions with his inner circle, Lincoln was gifted with great self-awareness and never reacted poorly to comments made by others. Throughout his life, Lincoln was forced to deal with criticism and humiliating characterizations and rarely did he react quickly, poorly, or in kind. His responses were measured, appropriate, and very timely. To better illustrate my point, I have chosen two separate examples.

One of Lincoln’s chief rivals from the primary of 1860 was Salmon P. Chase. Chase was a the 23rd Governor, and a United States Senator from Ohio before being named Treasury Secretary by Lincoln. Chase never got over his loss to Lincoln for the Republican nomination. There is evidence that Chase continued his quest for the White House, even trying to win the 1864 nomination away from the incumbent for whom he served. Multiple times, in moments of protest, Chase sent resignation letters to the President. Only after his reelection in 1864 did the President accept his resignation. Rather than reacting quickly and poorly, Lincoln first considered what Chase was able to do for the country: namely, developing our first paper currency and structuring our nation’s finances to survive a protracted and costly war. When Lincoln finally accepted Chase’s resignation, he named him the sixth Chief Justice of the United States Supreme Court.

If we stop and consider the positive impact Lincoln had on people, Frederick Douglass would certainly come to mind. Against the advice of many and at his own personal peril, Lincoln wrote and issued the Emancipation Proclamation on January 1, 1863, changing the legal status of over three million slaves. A careful review of comments made by Douglass reveals that he had said some very harsh things about Lincoln. Douglass commented after Lincoln’s first inaugural speech, “This revealed Lincoln’s compulsion to grovel before the foul and withering curse of slavery.” After the President invited a delegation of freed slaves to the White House in August of 1862, while working on drafts of the proclamation, Douglass lashed out at the president in the press for discussing colonization of the freed slaves. What Douglass didn’t realize was that Lincoln was trying to find ways to free the slaves, win the war, and have a Union that could be reconstructed. Lincoln never retaliated or spoke out against Douglass. In fact, at a White House reception following the 1864 election, Douglass recounted the following: “Recognizing me even before I reach him, he (President Lincoln) exclaimed, so all could hear him, here comes my friend Douglass.”

This self-awareness skill that President Lincoln mastered is so needed in today’s outspoken world. As leaders, we need to listen more, speak less, and react when appropriate. It sounds easy, but we all know that it’s not. We must become intentional about learning and mastering our own emotional intelligence. 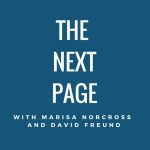 Be sure to listen to The Next Page podcast as Marisa and I take a deeper dive into measured responses, emotional intelligence, and self-awareness.

It’s Time To Get To Work

It's Time To Get To Work Randy Wolken, President & CEO On Wednesday, I watched the Inauguration with gratitude for the peaceful transition of power. During this challenging time, we...

Episode 188: It Was Bitter Cold

Episode 188 of The Next Page is available for download! Download Here: iTunes | Google Play | PodBean In this week's episode, we're beginning our new series: Monuments. We'd love to hear from you! Send...