MACNY Announces 2017 Innovators of the Year 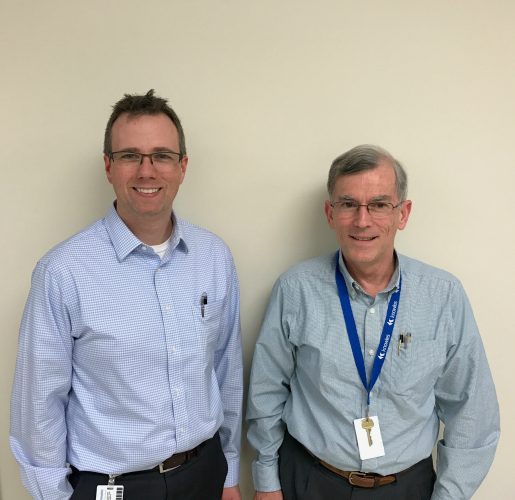 Syracuse, New York- MACNY, The Manufacturers Association today announced that Tim Brauner and David Bates of Knowles were together nominated and selected as the 2017 MACNY Innovator of the Year award winners. The duo was nominated by Chris Dugan, on behalf of the entire team at Knowles, on account of their teamwork, innovative thinking and commitment to the success and growth of Knowles in the RF (Radio Frequency) Industry.

Dugan stated, “Knowles Capacitors wishes to nominate Tim Brauner and David Bates for their work in the RF Industry.  Specifically, these two individuals are the founders of the Thin Film product line here at Knowles which, through their forward thinking ideas and innovation, will be the future success of our location here in Cazenovia.  The work from these two individuals has created double digit growth every year for the past several years and has put us on a path for future explosive growth.”

Tim’s teammate David has over 20 years of experience in the RF industry.  As Chief Scientist at Knowles, David is described as “having an adept skill to read between the lines of where customers want to go with their technology road map and ensuring our road map aligns with theirs.” During his time at Knowles he has developed processes from the ground up to accommodate this ever changing road map.  He is constantly seeking ways to merge new technologies with current processes to maintain Knowles’s status as an industry leader in RF products, particularly in the Microwave field.

When submitting the nomination, the team at Knowles was adamant that the strength and success of these two acclaimed employees was first and foremost attributed to their teamwork and support of each other, and felt the nomination would only be suited if both were to receive as the team they are.

Dugan stated, “The reason why we ask for a dual-nomination is because of the relationship these two serve one another.  Tim drives the commercial innovation and David the technical.  Tim and David identify needs in the marketplace. David introduces unique technical solutions and Tim commercializes them.  Tim also provides the energy to the whole operation to respond to the opportunities in the marketplace.  As a result of their leadership, the business has averaged over 40% CAGR the last two years and anticipates extraordinary growth for the foreseeable future.”

The MACNY Innovator of the Year Award, sponsored by Corning, Inc. was created at the suggestion of MACNY member Executives and CEOs, as a way to nominate and recognize individuals within a company who consistently demonstrate forward thinking ideas in the areas of technology, innovation, and advancement of products and production.

“On behalf of MACNY, I would like to extend my congratulations to Tim, Dave, and Knowles on the receipt of this well-deserved honor,” stated MACNY President & CEO Randy Wolken. “We were pleased to receive nominations for many well-qualified candidates who are considered outstanding innovators by their peers and colleagues. Tim and Dave have demonstrated forward thinking skills, an ability to take a challenge and address it head on, and deliver much needed results that have allowed for record sales and growth. On behalf of the MACNY membership, we look forward to recognizing Tim and Dave, and their many achievements at MACNY’s 104th Annual Dinner.”

As part of MACNY’s tradition, Tim and Dave will be honored at MACNY’s 104th Annual Dinner, in front of Knowles colleagues and an audience of over 500 manufacturers and business leaders from Central and Upstate New York. The dinner will be held at the Syracuse OnCenter on May 18th, 2017. For tickets or additional information, please contact Debbie Sindone at 315.474.4201 ext 24, or [email protected].