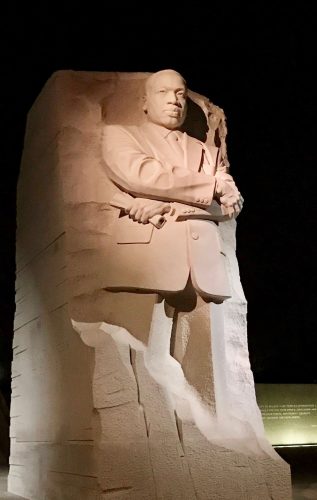 It was a bitterly cold early March evening that felt more like early February. The air was still, and the park lights reflected as a perfect mirror image on the reflecting pool, just a stone’s throw from the tidal basin. As I rounded the corner and wandered through the massive mounds of granite, the 30-foot-tall monument stood before me. The granite shown bright against the night sky. This monument, almost ghostly in appearance, only partially carved as if it were emerging from the granite before my eyes, was the image of a man snatched from this life so prematurely. His arms crossed, a roll of documents in his left hand, and eyes in a far-off gaze. Without reading the plaque, I knew right away who he was. His image so recognizable.

For many years, his birthday was just a day off from school, just two weeks after the Christmas break. Later I developed an awareness of who he was, the just cause for which he struggled, and his tragic assassination from a historical perspective. In recent years as a student of leadership, he has come to mean much more to me. Dr. Martin Luther King Jr. was one of the finest vision casters this world has ever known.

Andy Stanley wrote, “A vision is a clear mental picture of what could be, fueled by the conviction of what should be.” Dr. King not only cast the vision of what could be, but he also shared the evidence of his conviction that it should be. He gave us finely detailed word pictures of a time that did not yet exist while simultaneously giving us the underlying reasons why it should exist.

In his famous “I Have a Dream” speech, Dr. King explained that his dream was deeply rooted in the American dream. He masterfully drew from the past to establish the “should” behind his vision with these words. “I have a dream that one day this nation will rise up and live out the true meaning of its creed; We hold these truths to be self-evident: That all men are created equal.” Upon hearing that or reading it in print, everyone would know the statement was the opening of the preamble to our Declaration of Independence. Without accusing us, he was telling us that his vision was part of the fabric of the founding of our great Republic. He went on to share lyrics from the song every child learned in elementary school:

My country tis of thee,
Sweet land of liberty,
Of thee, I sing.
Land where my fathers died,
Land of the pilgrim’s pride,
From every mountainside
Let freedom ring.

Far too often, leaders spend so much time and treasure on crafting and casting the vision but forget to give the message of why the vision should be realized. Thankfully we have Dr. King as a reminder of how great leaders cast a vision that can live on for years.

Monuments are not erected because the person was perfect but rather to challenge us to press on and strive to be more like them and to work on building a more perfect union. When I looked at Dr. King’s monument on that bitterly cold night, I was reminded of a phrase in his famous speech of 1963, “Hew out of the mountain of despair a stone of hope.” I am also still reminded that the monument isn’t finished, that his message is also not finished. His image stares off into the future, contemplating what we will do with the message he left and the vision he cast.

If you would like to hear more about Dr. King and this magnificent monument, please join Marisa Norcross and me for Episode 188 of The Next Page podcast.

Episode 193 of The Next Page is available for download! Download Here: iTunes | Google Play | PodBean In this week's episode, we're continuing our Monuments series and traveling back to Fort Schuyler (Stanwix) in...

Old Rags, or Much More

Old Rags, or Much More David Freund, Chief Leadership Officer It is August 3, 1777 and hopes that the 700 patriots could hold the fort were growing dim. General Barry...

It’s Time To Tackle Our Infrastructure Challenge Randy Wolken, President & CEO The United States has woefully underinvested in our infrastructure for decades. MACNY agrees with the National Association of...